The Monument to the Immigrants

On St. Joseph’s Day, Sunday, March 19, 1995, the Italian American community unveil and dedicated a work of art that is not only a thing of beauty but, more importantly, a tribute to our brave forefathers.

Without money, without knowing the language and, for the most part, without a formal education, these brave, hardworking, family oriented pioneers left their native soil and ventured to a new country, a new world… America.  It is to these ancestors we dedicate this MONUMENT To The IMMIGRANTS.

A Note From The Artist And Sculptor

At the turn of the century many Italian immigrants came to this country, a large number of them through the port of New Orleans.  This monument will commemorate and honor those who left their country to find something better for their future as well as their children’s.  The female muse is a symbol of hope in different civilizations.  The star she holds represents guidance to the explorer toward his desire to find a new place and to achieve his dreams.  Her gown, an inspirational and spiritual presence, flows over the figures of four immigrants forming a family nucleus.  In each of their faces one can see the grim determination and courage they must have had to leave behind everything they knew.  These people are being rendered from real photographs of their time to capture the proper wardrobe, detail and, most of all, the look in their eyes. This site on the river front (the new extension of Woldenberg Park), where most immigrants actually first set foot on solid American ground, is the rightful place to honor these ancestors, our ancestors, who created this great country. This monument is being sculpted of white marble and is placed on a triangular base depicting the plow of a ship.  The sculpture can be observed from all extremes of the triangle, a full 360 degree view.

About The Artist And Sculptor

Franco Alessandrini was born near Florence, Italy in Sanseolcro in 1944 and has been a resident of New Orleans for the past 20 years.  His works are in private and public collections in the United States, Canada, Europe and South America. He has won numerous awards in both Italy and the United States.  He has exhibited his works in various shows and galleries throughout Italy, the United States and South America. He has done several documentaries for television and radio and has been written up in numerous magazines, newspapers and periodicals throughout the United States and Italy. Among his many accomplishments: artist-in-residence at the Italian Village during the 1984 World Exhibition of New Orleans: artist in 1986 “A Fantasy of New Orleans”: a Byzantine glass mosaic in a permanent setting in a marble fountain at the New Orleans Convention Center.  His latest work of artistic talent is his design and sculpture of the Christopher Columbus Monument for the Quincentennial Celebration of the Discovery of America in Baton Rouge in 1992.[/vc_column_text][vc_separator style=”double” el_width=”50″][vc_column_text] 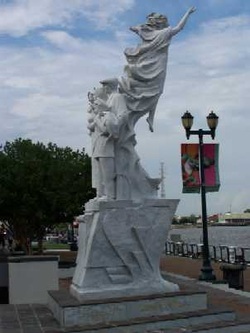 We have, over the years, constructed monuments to musicians, to educators, to civil rights leaders, to the memory of wars and battles, to philanthropic millionaires, to generals, and to politicians. Where is the symbol of recognition and respect to those who made it all possible? Where is the monument to the immigrants? The simple fact is there are no monuments to the immigrants

Is this because we have taken our fathers and grandfathers and great-grandfathers for granted? Have we simply accepted their roles without expressing our appreciation and acknowledgement of their success and accomplishments?

These are the thoughts that ignited the concept for plans for a MONUMENT TO THE IMMIGRANTS. Not necessarily Italian American immigrants but all immigrants, whether they are Irish, German, Jewish, Russian, French, etc.

A monument can take many forms: a statue, a plaque, an obelisk, or a column but this is not what I had in mind. Instead of words inscribed in marble or brass, I envisioned a monument involving the immigrants themselves and a symbol representing their objective. This was indeed a monumental undertaking.

After reviewing the works of many artists and sculptors from around the country, a local resident sculptor was commissioned to develop the concept and eventually the monument itself.

Franco Alessandrini, an immigrant himself and a resident of New Orleans for the past 20 years, drafted and submitted over 100 concept sketches and there were hours and hours of concept meetings before the final design was agreed upon.

The monument depicts the immigrant family in authentic turn of the century clothing. The four immigrants form a family nucleus and in each of their faces one can see the grim determination and courage they must have had to leave their native country. These immigrants are being rendered from real photographs of their time to capture the proper wardrobe detail and most of all, the look in their eyes. Towering over their family is the female muse demonstrating the symbol of hope. The star which she holds toward the heavens represents guidance to the explorer toward his desire to find a new place and to achieve his dreams. Her gown, an inspirational and spiritual presence, flows over the figures of the four immigrants.

All of the figures are placed on a triangular base of white Carrara marble which represents the prow of a ship. The sculpture can be observed from all extremes of the triangle, a full 360 degree view.

Realizing that to commission such a talented artist and sculptor and to create such a work of art large sums of money must be raised to assist in the “start-up” funding for this monument. The Italian American Marching Club has underwritten the initial expenses. The monument is no longer a dream of Tony Russo but is quickly becoming a reality.

Franco Alessandrini has returned to his native town of Carrara, Italy where he has carefully chosen a block of white Carrara marble from the mountains of the Carrara region and has begun construction of what is sure to be a priceless work of art.

It is the hope and objective of the monument sponsors that all who feel the same affinity with our immigrants will take an active part in sponsoring this visual and permanent respect to our immigrants.

A call is being made to the business community, and the corporate community, but most of all to the individuals who wish to honor their parents or grandparents, to help sponsor this once in a lifetime creation.

The projected cost for this virtually indestructible 18 foot memorial is estimated at $ 500,000.00. It is hoped that enough funds are raised to create a perpetual trust for the care and maintenance of the monument so it can be enjoyed by generations to come.

The proposed location for the monument will be on the Riverfront in the new extension of Woldenburg Park where the Riverfront meets the intersection of Ursulines Avenue, with the immigrant family facing down Ursulines and the female symbol of hope reaching with her star towards the river. This location is significant as it is the exact area where most of immigrants actually first set foot on solid American grounds. It is a rightful place to honor these ancestors.

The dedication of this monumental undertaking, the MONUMENT TO THE IMMIGRANTS, is scheduled for March 19, 1995.

The individual name inscription locations are limited and receipt of sponsorships with inscription instructions will be numbered in order to determine the particular location of the inscription on the monument. For your convenience, a sponsorship application is available for prospective sponsors.[/vc_column_text][/vc_column][/vc_row]