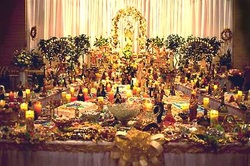 A St. Joseph Altar is an offering of Love, Labor and Sacrifice in honor of the Patron Saint of the Sicilians and the Universal Church.

According to legend, the St. Joseph Altar originated in Sicily, many centuries ago during a period of drought and famine.  In desperation, the people turned to St. Joseph asking his help and intercession.

When the rains came and the crops prospered, their prayers were answered.  In thanksgiving, the community made offerings to St. Joseph of their most prized possession, FOOD!

In his honor, they erected a lovely altar, with three levels to represent the Holy Trinity.  They draped it simply and beautifully in white, adorned it with flowers.  They then selected their finest grain, fruits, vegetables, seafood and wine and invited all the poor to share in their prayer and festivity.

The custom and devotion continue to this day.  Each year, altars laden with food are prepared on March 19th to celebrate St. Joseph’s Feast Day.  Reasons for having the altars vary: to fulfill a promise; to give thanks for a favor granted, such as the safe return of a loved one from war, for healing the sick, for a happy family life, for success in studies or business.  It is also an opportunity for the prosperous to share with those less fortunate.

Preparations are made weeks in advance for the Great Day.  Much hard work is involved, but participants, family and friends, joyously accept this as a form of sacrifice and a labor of love.

Many hours are spent shaping and designing the elaborate loaves of bread and cookies which decorate the altar.  Quite a number of these items are symbolic.  The Cuchidati, large golden-brown bread with a glossy finish of eggwash and sesame seeds, is rolled and cut into wreaths representing the Crown of Thorns, hearts symbolizing the Sacred Heart of Jesus and Mary, the Cross representing THE CRUCIFIXION, THE Chalice for water and wine, a Monstrance containing the Host, St. Joseph’s staff and beard, palms representing those strewn in Jesus’ path in Jerusalem; Pupacoulova (baskets containing dyed eggs foretell the coming of Easter).  There are fish, birds, flowers and whatever the artistic temperament dictates.

The cookies are everybody’s favorites; fig cakes in many lovely patterns, large and small; Biscotti, various shapes and sizes iced in colors of pink, green, white, yellow and chocolate, flavored with almond, vanilla, lemon, anise and other spices.  The Pignolati or GiGi’s are pastry kernels molded with caramelized sugar into pyramids which represent the pine cones Jesus played with as a child.  There are fluffy coconut bars and lambs, Bible-shaped layer cakes, cannoli and sfingi (Italian-style Beignet).

In addition to all the wheat products, there is the great display of fruits, vegetables and a variety of seafood.  No meat is ever served on a St. Joseph Altar perhaps, because the Feast day occurs during the Lenten season or because there was always a scarcity of meat.  The few goats and cattle were retained for their milk and cheese.

The altars groan under the weight of Baked Redfish, twelve fried whole trout, (which are representative of Christ’s feeding the multitudes.  Others claim this represents the 12 apostles).  Shrimp, crabmeat and tuna are used in stuffed vegetables, such as green peppers, eggplant, squash etc. Codfish (baccala), lobster, crawfish and oysters also enhanced the table.

Pasta Milanese is the leading entrée on the Altar.  The tomato sauce is made with a fish base, anchovy or fresh sardine, wild anise greens, pignola and currants topped with fried seasoned bread crumbs (Modica) instead of cheese.  (The bread crumbs represent the sawdust of St. Joseph the Carpenter).

Most of the vegetables, finocchi, broccoli, spinach, green beans, cabbage, cauliflower are a major attraction; the carduni (cardoon) are delicious boiled, then dipped in batter and fried.

The green fava bean is also served in a frittata or with a garlic sauce.  When dried, roasted and blessed, it becomes the very popular “Lucky Bean.”  Legend has it that you will never be broke as long as you carry a “Lucky Bean.”

This myth began during one of the famines in Sicily.  The fava bean at that time was used as fodder for cattle.  In order to survive, the poor farmers prepared them for their table.  Thus, it became a “Lucky Bean.”  Today, it is considered a delicacy and used in numerous recipes.

A most important custom and a lovely one for the St. Joseph Day rites is that of having children enact the roles of the Holy Family, Jesus, Mary and Joseph.  Sometimes Angels or favorite Saints are chosen to accompany them.  A table is set especially for the children.  They are served a very small portion of each food on the altar beginning with an orange segment and other fruits, Lentil soup, Pasta Milanese, fish, frittata, artichokes, olives, salad, cheese, eggs, bread, cookies, rice pudding, confetti (sugar-coated almonds), fig and sesame seed cakes.

This ritual is solemnly observed and usually accompanied by prayer and hymns.  Guests dine after the Holy Family has completed their meal.

Then there is much levity and joyful exchanges of camaraderie.  The age-old expression is frequently used, “May St. Joseph always smile upon you!”[/vc_column_text][/vc_column][/vc_row]